The next release has been christened 3.5 and is running through a final round of testing before it ends up in the app store. The change log isn’t huge, but there is some good stuff in there (at least that’s what we think).

Here’s what the event edit screen looks like in the latest beta. There is a fairly subtle change that points to one of the new features in 3.5. 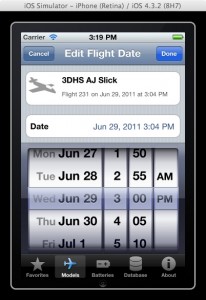 There’s a similar thing going on with cycle dates & times. When using this, you need to be careful as RCLogbook does allow you to get cycle and event times out of sync.

This entry was posted in Release Previews. Bookmark the permalink.