Here’s the official list of major new features in RCLogbook 4.0 include:

The barcode functionality requires an iOS device with a rear-facing camera capable of 720P video capture – this pretty much means an iPhone 4, 4S, or 5 or a 4th generation or later iPod touch.

There have been a lot of changes under the hood to move to modern iOS 4.x APIs and other clean-up. Those changes turned out to be a lot more work than anticipated.

Well, wouldn’t you know it we found some last-minute bugs that popped up during some flying recently. So, we are still in a holding pattern on the release. There was an issue in the audio system that was causing “ducking” of the audio from other sources (like the iPod app) to not work as expected. There were also some other minor issues with the barcode scanner that needed to be dealt with. Functionality-wise, none of these were the end of the world, but they were annoying enough to fix.

The audio bug in particular proved to be really hard to track down. I still have no idea why what changed fixed the problem – the audio code was (mostly) unchanged from 3.8.x, where it worked fine. In any case, it appears to be working as of this evening.

Things look clean again, but now we have iOS 6 looming in a little over a week. The question is do we hold off until iOS 6 is out to get a quick beta in or just run some limited testing on the GM release that was made available to developers today. There’s also been some other changes in the latest tools that have implications for our planned support for iOS 4.2 (basically, iPhone 3G).

Beta just wrapped up. The 4.0 release should be on its way shortly…

The TODO list is down to about one-half of a hand’s worth of items. The last really big and complicated one just went in. Which means beta is close. There have been significant under-the-hood changes which means we will probably beat on it more before turning it loose for wider testing. Maybe, just maybe, we can get 4.0.0 on the store by end of August.

Ran into a nasty bug where a property changed from assign to retain and we forgot to pull the [object release] from dealloc. All hell eventually broke loose as the code ended up over-releasing an object that it should be holding on to. Lesson learned.

Posted in Bugs Harsh My Mellow, Release Previews | Comments Off

Of Tunnels and Lights

Next release is getting close(r). Wrapped up work on one of the biggest remaining changes this weekend.  Beta should be around the corner. More to come…

Second Bit on the Next Release

The following icon has been spotted in the 4.0 development builds

What this is for, I am not saying just yet. Speculations are welcome…

To-do-list-wise, 4.0 is pretty close to code complete. There is one more piece of infrastructure that needs to be done now that iOS 3 support is gone. The update is touching a lot of the code and is slow going. The bummer in all of this is that it is for a feature that folks probably will not even notice.

There’s a bug in 3.8.1 that can cause RCLogbook to crash when working with helicopters that log fuel. The crash can happen on either the flight complete or the flight edit pages of the UI. The bug has been isolated and squashed and a fix is on its way in release 3.8.2. While we were in the code, we tweaked a few other things to improve stability and robustness.

To work-around the crash, your best option is to turn off fuel logging while flying and record fuel usage the old fashioned way. Once 3.8.2 is out, you should be able to go back into the flight editor and update the fuel consumed.

The update was submitted this evening, should be out sometime next week depending on how busy Apple’s app approval gnomes are these days.

Apologies, as always, for the inconvenience…

First Bits on the Next Release

Strangely enough, the next release is moving very quickly for only being in development for a little under a month. Here is a screen shot of one of the new features. 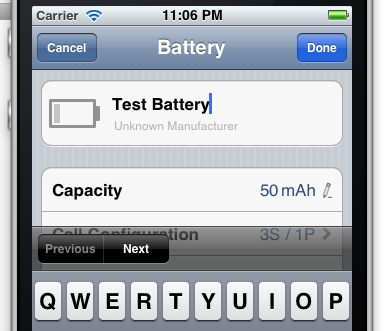 Navigating fields will be easier in the new world…

So, Just What is Next?

Aside from the little hiccup with 3.8.0 and iOS 4, we have been madly working on the next release. It is looking like this may make it out in a month or two. We are making good progress and have kept the feature set to a big feature or two. That being said, as the next version represents the break with iOS 3, there has been a lot of changes under the hood to catch up with the iOS 4 functionality that we had ignored a little. For example, we have finally killed off a bunch of “If iOS 3 do X, else do Y” type code and have moved over to more modern APIs such as the block-based animations.

As to what the “user visible” new stuff is, well that will have to wait for another post…